Hello, Woollydaze here… with Littlest Woolly, meaning this blog post is being written one handed…

The first few weeks as a family of four have passed relatively peacefully; so far Littlest Woolly is fulfilling the ‘placid second baby’ stereotype. Her big brother is still being kind to her, showering her with kisses and bringing her toys to play with. We’re trying to keep his life as normal as possible which means lots of out and about for the newborn; in three weeks she’s been to one barbecue, one dinner party, two play dates, two parties, two official appointments, work twice and the farm park three times. Next week she has two social commitments and her first holiday.

All of this touting a baby around has meant I’ve been gathering compliments, but not all have been for my daughter. She has been wrapped in knitted love for many of her
trips, but none of it was made by me. I’ve been too busy making for other people’s babies. If you’re an artist or a crafter, you’ll understand how this happens.

I haven’t actually been keeping a tally, but my feeling is that the this blanket has had more compliments than the accompanying baby.

Woollydaze Too, you have managed to upstage your cute newborn niece. Ravelry link to the project here. The cute kimono-style jacket that Littlest Woolly is wearing was also made by Woollydaze Too, not for Little Woolly but for a friend’s baby. It’s been  passed on and reused a number of times, which is only right a proper with baby clothes that get so little wear. Ravelry link for this project here.

Over that past few days, a couple of presents have arrived in the post which have delighted me because the people who have made them are learning to knit (aren’t we all, really, but what I mean is that they are mastering the basics). This was sent, with apologies for it being out of season, by one of the vet students who stayed with us during lambing: 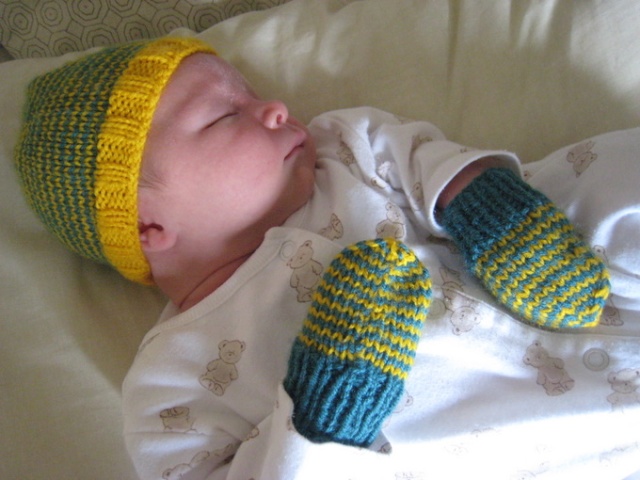 Isn’t it great? I can’t wait for the weather to be cold enough to be able to package Littlest Woolly up in this for a trip outdoors. And this little fellow arrived courtesy of a university friend who wrote in the accompanying card ‘Enclosed is my first and last attempt at a teddy’. 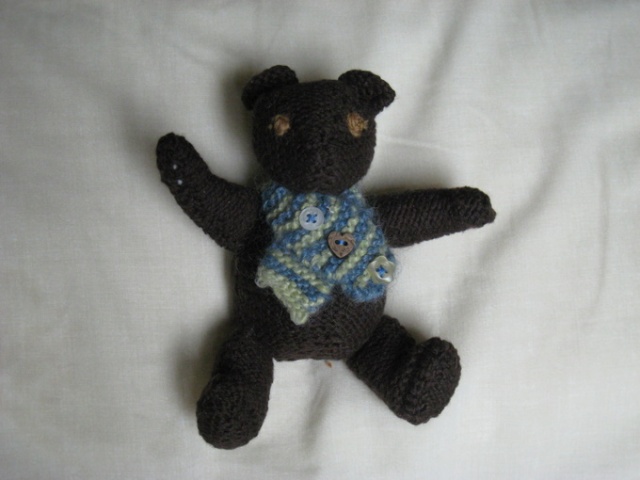 I hope not. I’m impressed by the amount of increasing and decreasing that has been done to give this bear his shape, and I love the little buttons on the scarf which are a stylish finishing touch.

We are, of course, grateful for all of the cards and presents and good wishes that we’ve received over the past few weeks. The clothes that have been given will all be useful and Littlest Woolly, could she talk, would be thanking the givers for saving her from wearing her brother’s hand-me-downs and constantly being mistaken for a boy. We’ve been given clothes in a good range of sizes so she’ll be appropriately dressed for her first year.

An aside: In my last post that I mentioned that knitters pop up everywhere; further evidence for this was gathered when Littlest Woolly and I went to register her birth. The registrar was a knitter, and several people in the same office also knit. Together they’d produced a knitted version of the recent Royal Wedding that was tucked into the corner of an office. Sadly I didn’t have my camera with me, but trust me it was amusingly amazing. The Queen was resplendent in a purple dress, and  I wonder who got to knit the corgis? I picked up on the media furore (well, it was a furore in terms of a story about knitting) surrounding this book, but I didn’t expect to ever see a finished version. Is it terribly geeky of me find this funny? No, you don’t need to reply, I already know the answer. I would say that I need to get out more, but we haven’t really been stuck at home.

This entry was posted in Uncategorized. Bookmark the permalink.